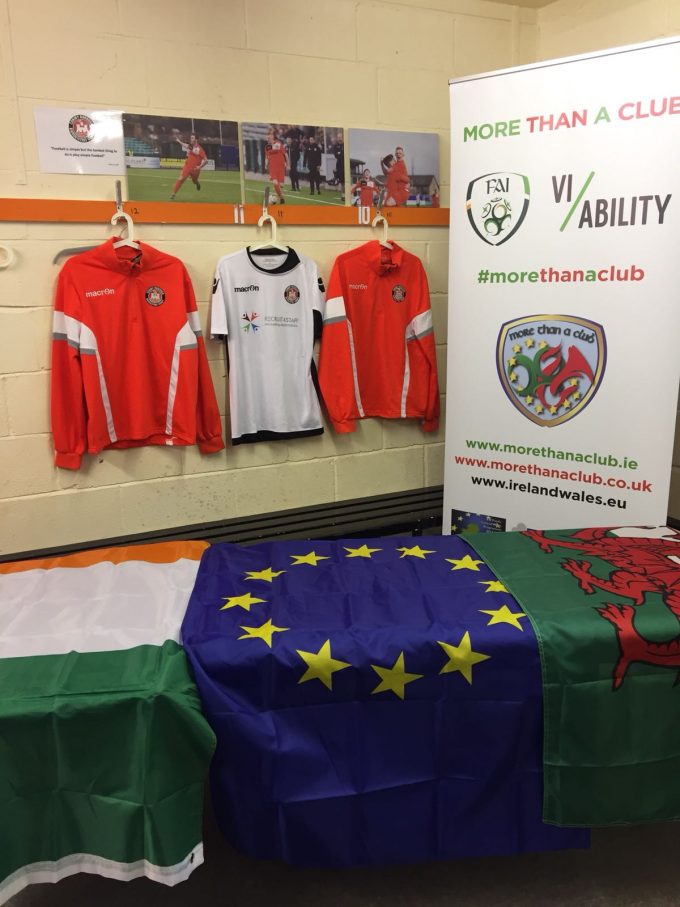 Europe Day is held on May 9th every year and celebrates peace and unity in Europe.

Both the Football Association of Ireland and Welsh social enterprise, Vi-Ability are marking the occasion by proudly flying the EU flag on both sides of the Irish sea. Both organisations are currently united in benefitting from European funding designed to create social enterprises in disadvantaged communities in Ireland and Wales via their cooperation in the “More than a Club” project. 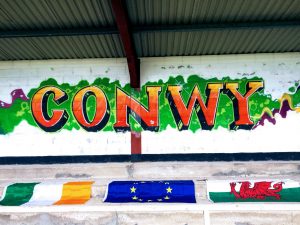 The “More than a Club” project, is a cooperation between the Football Association of Ireland and Vi-Ability and is funded by the European Regional Development Fund (ERDF). The pilot project is supported by the Ireland Wales European Territorial Co-Operation programme, which is helping to strengthen collaboration between Ireland and Wales to address common economic and social challenges.

The project aims to develop new social enterprises aligned with four football clubs in Ireland and Wales, which will design, develop and deliver innovative social programmes centred around health, education and social inclusion.

Partner football clubs, Conwy Borough FC and Haverfordwest County in Wales and Irish counterpart clubs, Bohemian FC and Cork City FC will be delivering activities during the month of May to demonstrate how the EU funded Ireland-Wales programme is facilitating best practice and learning, with the key aim in addressing health, social inclusion and education in each of the club’s localities.

On Europe Day, Conwy hosted the newly formed “Picasso Club” which is working with local organisations, Conwy Connect and TAPE Community music and Film, to deliver arts classes to individuals with learning disabilities and mental health disorders. The programme is delivered every Tuesday, in the mornings and afternoons at Conwy Borough’s clubhouse.

The group painted Welsh, Irish and European Flags, which have been displayed in the clubhouse, as well as formally raising the flags to celebrate this Day. 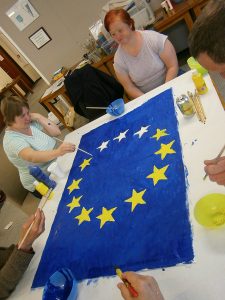 The benefits for the Individuals taking part in the programme at Conwy is endless and learners benefit in a variety of ways;

Some of the group taking part in the Picasso club also benefit from the Walking Football sessions every Saturday, which are delivered at the club. In addition to the Picasso club and Walking Football, the club also hosts local Slimming world and promotes healthy activities to the women and men who attend, as well as being a multi-purpose venue for local organisations and members of the communities to use. 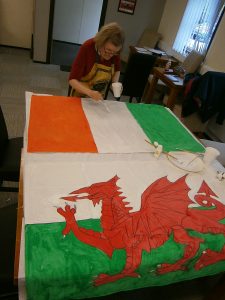 Kelly Davies, the project’s Head of Community and Founder of Vi-Ability commented,

“We want Conwy Borough FC to become a focal hub of their community. We believe that because of the “More Than a Club” project, the footfall through the club’s doors has massively increased. The Club has been successful on the pitch and is making a huge impact in the community off the pitch and things are looking very bright beyond this pilot project. However, it requires local organisations and local people to work together in sustaining this work and it is our job to educate and provide opportunities for the people to grow and prosper.”

Similar social programmes have also been ongoing in Ireland with both Bohemian FC and Cork City FC delivering valuable initiatives such as Walking Football and the unique Football Transformation programme which supports primary school children with numeracy skills whilst also promoting health-enhancing physical activity among the group. A football themed dementia support programme has also been ongoing in both regions and both the FAI and Vi-Ability are facilitating exchanged learning by comparing and sharing the experiences gained and the approaches used to engage their various service users as the project evolves across both regions.

“Europe day is a day to reflect on the opportunities that access to EU funding has facilitated. Both the FAI and Vi-Ability are delighted to have the opportunity to cooperate on such a valuable project as “More than a Club” which is not only promoting social good in both regions but is actually changing the lives of so many people for the better.”