October 19, 2018 natasha@vi-ability.orgMore than a Club 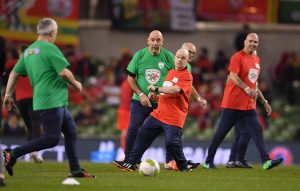 UEFA Nations League game at Aviva Stadium, Dublin on Tuesday 16th October, another generation of “Senior” Irish and Welsh footballers were rolling back the years with a fine display of football skills and a visible camaraderie which entertained the large attendance during the halftime break.

Representatives from the “More than a Club” Walking Football programmes in Ireland and Wales were on hand to showcase some of the work being done off the field by the Football Association of Ireland (FAI) and Welsh social enterprise partner, Vi-Ability, as part of the Ireland Wales cross-border collaboration project.

“More than a Club” is a project which aims to develop new social enterprises aligned with professional football clubs in Ireland and Wales and is currently developing and delivering innovative social programmes centred on health, education and social inclusion.

The pilot project is supported by the Ireland Wales European Territorial Co-Operation programme, which is helping to strengthen collaboration between Ireland and Wales to address common economic and social challenges. 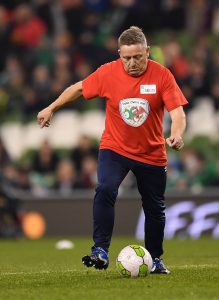 The Walking Football programme is a social initiative designed for older football lovers keen to keep fit and retain an interest in playing football. It’s a version of the beautiful game in which everybody can join in irrespective of age or physical condition due to the unique rules aimed both at avoiding injuries and facilitating the playing of football by those who may be physically disadvantaged.

The manner in which the sport is played promotes cardiovascular fitness whilst producing the least stress on the body.  It also helps participants maintain an active lifestyle. Walking football is on the increase in Ireland and Wales and is a valuable social outlet for older people who may be experiencing social isolation or who may just want to stay involved in playing the game they’ve loved for decades. Although playing the game itself is a big attraction, the post-match cup of tea and a chat with fellow football lovers is equally important. Participants of both teams thoroughly enjoyed the Aviva experience playing in front of almost 40,000 fans with a keenly contested game ending in a draw.

Welsh player Michael Brute said: “I really enjoyed that! What an experience to play in front of almost 40,000 people. It was great to do this with lads who have become good friends through participating in the walking football programme in Conwy.”

The walking football match was the second project event of the day and followed a “More than a Club” project steering committee meeting earlier to discuss the project’s successes to date and to explore new partnerships and future plans for the social enterprises that have been born as part of this project. 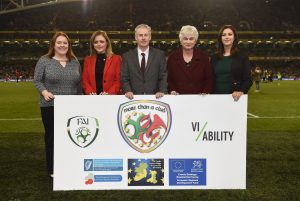 Overall the day was a huge success and showed encouraging signs that the project is engaging those hardest to reach, improving community health, wellbeing, and developing forward-thinking social enterprises which will continue to support people across all four regions in Ireland and Wales (Dublin, Cork, Conwy and Pembrokeshire).

“The new social enterprises formed with the support of the Ireland Wales programme are undoubtedly having a positive impact on a wide range of people from children to older community members in Irish and Welsh communities. The range of programmes being delivered address a variety of social needs and our Walking Football programme is just one of the valuable interventions contributing to an improvement in people’s lives.

It’s fantastic to see the passion that the walking footballers from Ireland and Wales still have for the game. They thoroughly enjoyed the experience of performing in front of almost 40,000 fans on a pristine Aviva pitch. The camaraderie among both sets of players was particularly heart-warming and a clear indication of what this programme is all about … enjoying a game of football no matter what age you are and perhaps even more importantly, enjoying the social opportunity which this programme provides. I’ve no doubt that this version of the beautiful game will continue to flourish.”