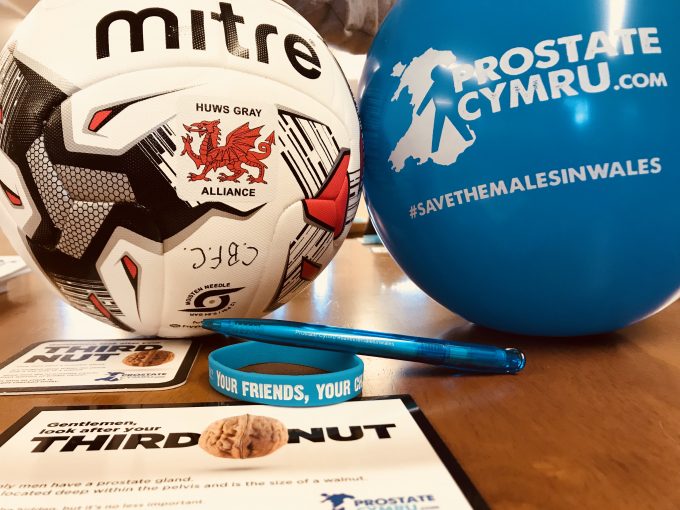 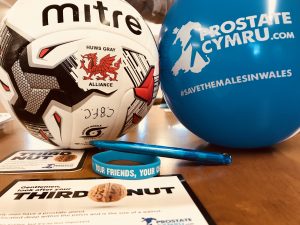 On Friday 21st September Conwy Borough FC, known as “the tangerines”, turned blue in support of Prostate Cymru at their local derby match vs Rhyl FC. With members of the club having been affected by prostate cancer recently, the most common cancer diagnosed in Welsh men, Conwy Borough FC teamed up with Prostate Cymru to raise awareness and funds.

Prior to the match, the eighteen man squad of the semi-professional football club under the captainship of Gerwyn Jones trained in Prostate Cymru t-shirts and listened to key facts about prostate diseases including prostate cancer at their pre-match talk. During the match, the team wore a specially designed blue kit instead of their usual orange. Fans battled the stormy weather and flooded roads to reach the Huws Gray Alliance League match and despite the weather, Conwy Borough Football Club recorded the highest numbers on the gate so far this year. Conwy fans were rewarded for their attendance with a 2 – 0 win over Rhyl.

The club produced a special blue match day programme and included an insert from local assembly member Janet Finch-Saunders expressing her best wishes for the fundraising and awareness evening. Fans from both Conwy and Rhyl were encouraged to wear blue in support of the charity at the match which kicked off at 7:30 pm.

Marketing & Events Coordinator Owen Pugsley and Chief Executive Tina Tew from Prostate Cymru were at the event to raise awareness of prostate diseases including benign prostate disease and prostate cancer. Fundraising also took place with charity t-shirts for sale, a raffle, a bucket collection carried out by local volunteers and a percentage of the match ticket sales donated to Prostate Cymru.

The evening was part of the More Than A Club initiative, a programme dedicated to helping clubs use the power of football to develop links within their local communities. Conwy Borough FC is one of four clubs from Wales and Ireland taking part in the More Than A Club project, led by the Football Association of Ireland and social enterprise Vi-Ability, to develop and deliver innovative social programmes centred around health, education and social inclusion.

Mandy Powell, head of Enterprise and Life Sciences at Vi-Ability said; “We were extremely proud to have hosted this event in partnership with Prostate Cymru and Conwy Borough FC. We’d like to say a big thank you to Prostate Cymru and everyone involved, especially to the Volunteers who helped with photography, stewarding and fundraising on the night. We’d also like recognise the willingness and ambitions of Conwy Borough to be ‘More Than a Club’ . The next step for us is to continue to promote the health, education and inclusion programmes we are delivering at the club which will help the club thrive and grow, ultimately benefitting the wider community.“

There are programmes that start next week at the club and it’s not too late to get involved. On the 2nd October, Conwy Borough FC welcome unemployed individuals to join social enterprise, Vi-Ability’s, award-winning ‘Run the Club’ programme, designed to improve confidence and skills which will help individuals move towards work. This free programme runs for 8-weeks on Tuesdays and Wednesdays, 10am-3pm. In addition to this, ‘Football Reminiscence’ starts on Wednesday 3rd from 3pm-4: 15 pm, for those football fans who want to chat about the history of the sport over a cuppa. Call Vi-Ability on 01492 583555 to reserve a place or email info@vi-ability.org for more.