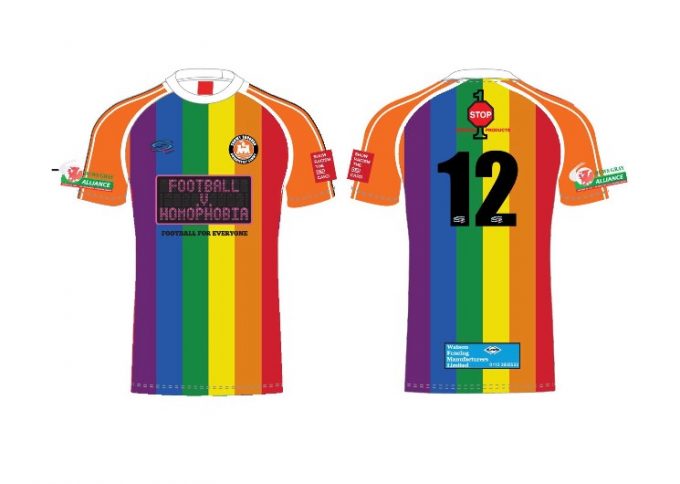 THE FIRST of its kind in Welsh football.

On Friday 8th March, Conwy Borough FC players came out onto the pitch in a rainbow kit to play a fixture against Prestatyn FC in support of football’s fight against homophobia.

Following the lead of Altrincham FC, this is the first of its kind in Welsh football, the Huws Gray Alliance side’s usual tangerine orange strip was replaced with the colours of the LGBT pride flag. This is yet another great example of the recent health and community awareness activities that have been developed and run by Conwy Borough FC as part of the more than a club project launched last year.

More Than A Club (MTAC) is a joint project initiative between the Football Association of Ireland and a vibrant Welsh social enterprise called Vi-Ability and is funded by the European Regional Development Fund via the Ireland Wales Cooperation programme 2014-2020.

The project will empower the clubs to recognise and utilise the powerful attraction of football and the value of their club brand locally to develop key strategic partnerships with statutory agencies and community groups to deliver important social programmes. In the process, it is expected that clubs will evolve as more valuable and relevant community entities becoming more relevant to more people in their communities. A recent example of the MTAC impact was the success of raising local awareness and funds for Prostate Cancer in collaboration with Welsh charity Prostate Cymru. 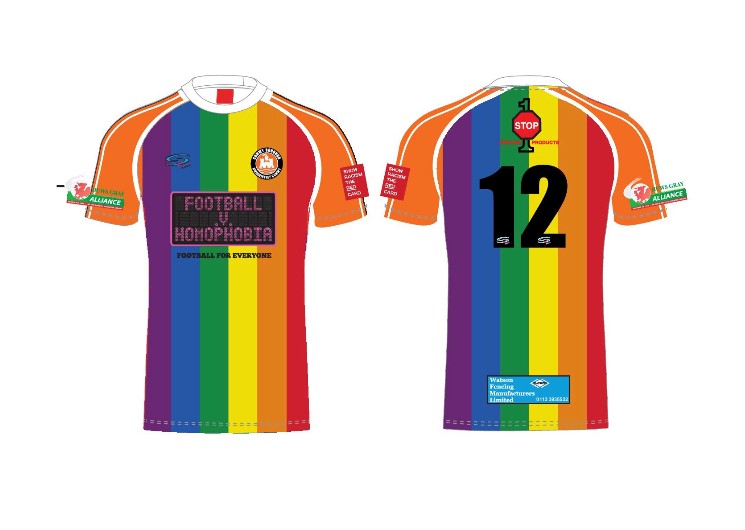 Football v Homophobia is global campaign that unites fans, players, communities, grassroots teams, professional clubs and governing bodies in opposing homophobia and prejudice against Lesbian, Gay, Bisexual and Transgender (LGBT) people in football. Conwy players will be donning a specifically designed kit by manufacturers ‘SKKits’, where the Football vs Homophobia logo will be featured prominently and centrally on the playing shirt.

Club Chairman Chris Wilton said: In the past few months polls have shown that whilst football fans would be more accepting than ever of a gay player in their team, as many as 72% of football fans have heard homophobic abuse at football matches.

Using homophobic or transphobic language towards someone because you don’t like the way they play football, manage a team, make a refereeing decision or because of whom they support is wrong.

It’s against the Laws of the Game and can be a criminal offense, but most importantly, it can make football an intimidating and unpleasant place for fellow fans, players, match officials and administrators of the game. We don’t accept that kind of behaviour here at the Y Morfa Stadium, and are so pleased that we as a club have been able to play our role in highlighting this and encouraging other Welsh teams to follow suit

“Attitudes in football are changing, but we all need to make sure that the language we use and the way we behave reflects this. Here we genuinely believe we can help make a real difference to the culture of football in Wales, and we’d like everyone to support too. We know that change starts with education and Conwy Borough FC recognises the role it has to play in leading the way on raising awareness of homophobia and LGBT discrimination within the club and the local community of Conwy”

After the final whistle had blown, the playing kit will be auctioned off to raise funds for local LGBT causes to continue their great work along the North Wales coast.

Mandy also added: We have been delighted with the success of recent activities at Conwy Borough FC: NHS health pop up kitchens, prostate cancer awareness events and fundraising, dementia  activities and memory walks is to name just a few over the last 6 months. Community awareness events such as these will not only help raise essential funds for the local charities to continue their work, but sales of replica shirts will also help sustain the club commerciality

The MTAC aims to utilise the power of football to address important issues such as homophobia in the local community. This is the first time in Wales an event has taken place and we are delighted that a culture has now been developed whereby residents / club members want to drive local issues themselves and take ownership of community issues.

The LGBT community has a high link to mental health illnesses.  It’s an uncomfortable but important reality that LGBT youth are four times more likely to kill themselves than their heterosexual counterparts. More than half of individuals who identify as transgender experience depression or anxiety.

Click on the website for details http://www.conwyboroughfc.co.uk/ and come along on March 8th to show your support!! A warm welcome awaits at Conwy Borough FC.

Exclusive replica shirts will be made available for general purchase from the club following an influx of enquiries from all over the world.

To purchase a shirt and a moment of Welsh footballing history please email: conwyboroughfc@outlook.com

Please get in touch for more details if you have an interest in the MTAC project. Empowering clubs to recognise and utilise the powerful attraction of football and the value of their club brand locally in order to develop key strategic partnerships with statutory agencies and community groups to deliver important social programmes.